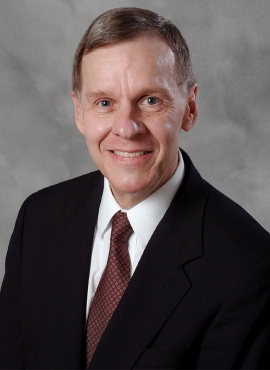 Chelsea C. White III is a professor and holds the Schneider National Chair in Transportation and Logistics in the Stewart School of Industrial & Systems Engineering at Georgia Tech​.

His most recent research interests include analyzing the role of real-time information and enabling information technology for improved logistics and, more generally, supply chain productivity and risk mitigation, with special focus on the U.S. trucking industry.

His involvement with the IEEE includes serving as President of the Systems, Man, and Cybernetics (SMC) Society (1992 - 93). He received the Norbert Wiener Award in 1999 and the Joseph G. Wohl Outstanding Career Award in 2005, both from the IEEE SMC Society, and an IEEE Third Millennium Medal. The Norbert Wiener Award is the SMC’s highest award recognizing lifetime contributions in research. He is the recipient of the 2008 IEEE ITSS ITS Outstanding Research Award for “significant contributions in research and development in global transportation and logistic systems.” He is a Fellow of the IEEE, a Fellow of INFORMS, a former member of the Executive Board of CIEADH (Council of Industrial Engineering Academic Department Heads), and the founding chair of the IEEE TAB Committee on ITS (now an IEEE Society). He is a former member of the World Economic Forum trade facilitation council. He is currently the Systems Strategies theme leader for the DHS National Center for Food Protection and Defense and the Industry Studies Association liaison to INFORMS.

Dr. White is the former editor of the IEEE Transactions on Systems, Man, and Cybernetics, Parts A and C, and was the founding editor of the IEEE Transactions on Intelligent Transportation Systems (ITS). He has served as the ITS Series book editor for Artech House Publishing Company. He is co-author (with A.P. Sage) of the second edition of Optimum Systems Control (Prentice-Hall, 1977), co-editor (with D.E. Brown) of Operations Research and Artificial Intelligence: Integration of Problem Solving Strategies (Kluwer, 1990), and co-editor (with D.L. Belman) of Trucking in the Information Age (Ashgate, 2005). He has published primarily in the areas of the control of finite stochastic systems and knowledge-based decision support systems.

He has been a keynote speaker at a variety of international conferences and meetings. He has made presentations at the Council on Competitiveness and the Brookings Institution on the impact of information technology for international freight distribution, security, and productivity. He has represented ITS America by providing testimony during a roundtable discussion entitled Reauthorization of the Federal Surface Transportation Research Program, held by the U.S. Senate Committee on Environment and Public Works. He has testified before the California Senate Committee on Transportation & Housing Public Hearing on ITS and before the Joint Georgia State Senate/House Future of Manufacturing Study Committee on trends & challenges in supply chain & logistics engineering.

He has served on the faculties of the University of Virginia (1976 - 1990) and UM (1990 - 2001). He has served as school chair of the Stewart School of Industrial & Systems Engineering (2005-10), where he is the director of the Trucking Industry Program (TIP) and the former executive director of The Logistics Institute. He serves on the boards of directors for Con-way, Inc. (NYSE: CNW), The Logistics Institute-Asia Pacific, the Industry Studies Association, and the Bobby Dodd Institute, and is a former member of the board of ITS America (a Utilized Federal Advisory Committee) and the ITS World Congress.

Chelsea C. White III received his Ph.D. from the University of Michigan (UM) in 1974 in Computer, Information, and Control Engineering.