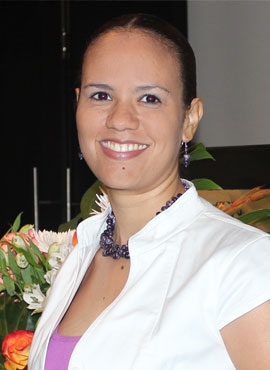 Yuritza began her professional career analyzing performance indicators of appointment personnel at Ricardo Perez, S.A. Later, she joined the project coordination team, where she conducted and implemented process improvement studies to certify Toyota dealers' in quality. In 2007, she joined the Research and Development Team at the Universidad Tecnologica de Panama [Technological University of Panama]; she developed projects in renewable energy and transportation logistics. In 2010, she joined the Georgia Tech Panama Center as Research Engineer, and became Senior Research Engineer and Administrator of the Center in 2011. Yuritza earned her bachelor's degree in Industrial and Mechanical Engineering at the Universidad Tecnologica de Panama (2004), and obtained a diploma in Project Management from the same university (2008). She also has a master's degree in Industrial Engineering from the University of Missouri, Columbia (2010) and holds a professional certification in Lean Supply Chain and Supply Chain Management (2012) from the Georgia Institute of Technology. She is also certified as a Kaizen promoter and as a TSM standards evaluator for Toyota service dealers.